Each curved lens is designed to work in tandem to capture full 360º 4K video that can be uploaded, along with photos, to social media platforms like Facebook and YouTube via the camera’s Smart Device app while on the go.

The camera is splashproof, shockproof to handle a 6.6-foot fall, dustproof and freezeproof to 14ºF. It also supports microSD card with capacities up to 128GB (Class 10 or higher).

The specs for lens “B” include: a 1.257mm focal length; f/2.4 aperture; seven-group, eight-element construction; and a maximum field of view of 244º without the lens cover and 235º with the lens cover. It too has a focusing range of 30cm to infinity.

In addition to 360° video, RAW/Globe video and wide-angle video, the 4K camera can record high-speed 360º movies at 1,440×720 at 120 frames per sec. Other shooting modes include time-lapse and loop recording. 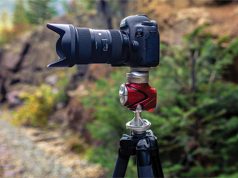