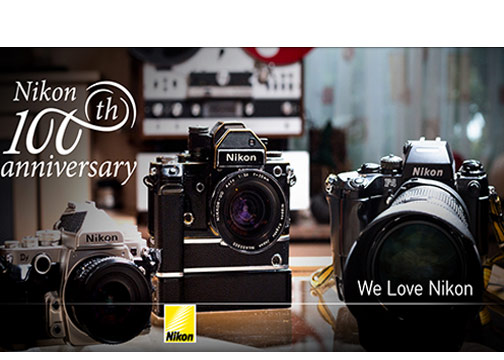 Tokyo, Japan—Nikon Corporation will release commemorative models and products celebrating its 100th anniversary, which falls on July 25, 2017. These special items will be available in limited quantities.

Since its establishment as Nippon Kogaku K.K. in 1917, Nikon has provided optical products based on its own optical and precision technologies. Guided by a corporate philosophy of “Trustworthiness and Creativity,” the company provides a wide range of products as well as services globally.

To celebrate its 100th anniversary, Nikon has developed commemorative models based on the optical tradition and advanced technologies the company has cultivated over the past century. The limited edition items also incorporate “the thanks and hope we feel looking toward the next 100 years,” the company announced.

In addition to the 100th anniversary models, Nikon is also preparing a special collection of commemorative goods. Here is a brief rundown of the limited edition items.

The D5 is Nikon’s flagship FX-format DSLR camera. It supports the work of professional photographers in such fields as press, sports and nature photography. It has also aided in activities related to the study and exploration of space.

The D5 100th anniversary edition has a dark metallic gray finish and a stamp on the bottom noting Nikon’s contribution to the study and exploration of space. An anniversary booklet detailing those contributions is also included.

The D500 is Nikon’s DX-format flagship DSLR that’s engineered to offer both agility and precise rendering. With its metallic gray finish and commemorative logo, the 100th anniversary edition combines an elegant look and feel with practicality.

The AF-S Nikkor 70–200mm f/2.8E FL ED VR is a fast telephoto zoom lens that has been well received for its ability to offer “superior agility and excellent optical performance since its release in 2016.” The commemorative lens comes with the individual glass elements that make up its internal workings, as well as a special stand and case for displaying them. This edition will provide those who purchase and use the lens with a sense of just how the lens achieves its characteristic rendering.

The WX 7×50 IF and WX 10×50 IF 100th anniversary editions are commemorative models in Nikon’s new ultrawide field of view WX series. The binoculars are engineered to provide incredibly wide fields of view with sharp and clear viewing all the way to field edges. The special commemorative logo is printed on the bottom of the binoculars’ central shaft. An exclusive serial number is also stamped on the top of it. In addition to the usual strap supplied with the binoculars, the 100th anniversary models also come with a WX leather strap embossed with the commemorative logo.

This is a commemorative edition of the Nikon 8×30E II, a binocular with an orthodox and classic design. Its 63.2° apparent field of view is realistic. In addition, a multilayer film coating on lens and prism surfaces ensures the field of view is bright and clear. The commemorative edition has an exclusive metallic gray finish and the anniversary logo is printed on it. Furthermore, it comes with a special strap and case.

Nikon also announced it will release the following collectible items.

Nikon 100th Anniversary Premium Camera Strap. This premium camera strap is made of the best Italian leather, which will improve with use and age.

More information regarding these commemorative products, including pricing as well as availability, will be released in June 2017. nikon.com/100th