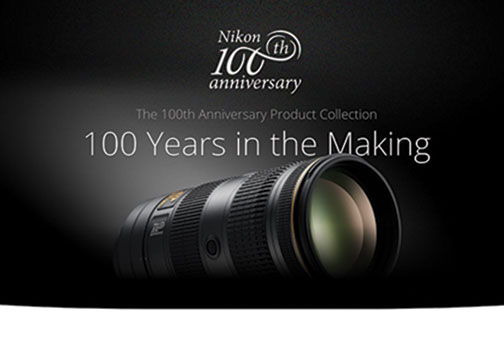 Melville, NY—Nikon Corporation released commemorative products and special collection items that celebrate the company’s 100th anniversary, which takes place on July 25, 2017. Since the company was established in 1917, Nikon has cultivated its status as a pioneer of optical technologies around the world, guided by a philosophy of “Trustworthiness and Creativity.”

The commemorative editions of Nikon models were developed specifically to show the company’s appreciation to all the photographers, creators and customers around the world. The products reflect the tradition and advanced technologies that Nikon has cultivated over the past 100 years. In addition to these commemorative models, a special collection of items was also released.

The D5, Nikon’s flagship FX-format digital SLR camera, is available in a dark metallic gray finish. The DSLR has an engraving on the bottom that notes Nikon’s contribution to the study and exploration of space. An anniversary booklet detailing those contributions is also included.

Also, a commemorative edition of the AF-S Nikkor 70–200mm f/2.8E FL ED VR lens is available. It comes with a display of individual glass elements that make up the internal workings of the lens, as well as a special stand and case. This lens has an SRP of $3,999.95.

The WX 7×50 IF and WX 10×50 IF binoculars are commemorative models offering wide fields of view that are clear and sharp to the edges. A special logo is printed on the bottom of each binocular’s central shaft, and an exclusive serial number is also stamped on the top.

In addition to the standard strap supplied with the binoculars, these models come with a WX leather strap pressed with the anniversary logo. The special edition WX 7×50 IF and WX 10×50 IF binoculars retail for $5,999.95 and $6,399.95, respectively.

Moreover, an anniversary edition of the classically designed Nikon 8×30E II binocular is being offered. Its 63.2° apparent field of view is realistic. Moreover, the application of a multilayer film coating to all lens and prism surfaces ensures that the field of view is bright and clear. This edition has an exclusive metallic gray finish and a printed logo on the strap and case. The limited edition Nikon 8×30E II binocular carries an SRP of $799.95.

Nikon also announced the availability of several collectible items. Nikon partnered with Swarovski, a leading crystal manufacturer, to create a crystal reproduction of the Nikon Model I. It has an SRP of $1,499.95 and is available exclusively through the Nikon Store.

The company is also offering a collection of lapel pins that represent its most historic and popular products, as well as the corporate logo, for $269.95. Additionally, Nikon released premium camera straps made of Italian leather for a $99.95.

Vintage T-shirts showcasing one of Nikon’s most iconic past logos (Nippon Kogaku) will be available for purchase in the U.S. beginning on July 25, 2017. They will sell for $24.95 on nikonusa.com.

Nikon Inc. has also produced a series of 10 limited edition camera posters highlighting some of the iconic cameras created throughout Nikon’s history. These posters, measuring 19.5×19.5 inches, are matted and framed to a size of 23.5×23.5 inches. They are hand-numbered and available in a limited edition; only 100 numbered posters are produced for each design. Pricing is $150 per framed poster, and they will be available in July 2017 at nikonusa.com in partnership with Level Frames.

Lastly, Nikon Inc. will be offering a 100th anniversary leather camera bag in partnership with the ONA brand. These premium bags are made with genuine leather and have the 100th anniversary and Nikon logos embossed. The bags will go on sale July 25, 2017 for an SRP of $399.95. nikonusa.com