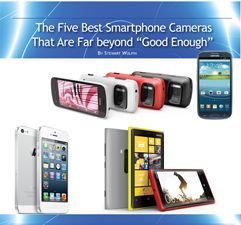 “Good enough” have become the two dirtiest words in consumer electronics (okay, other than “loss leader”). MP3s are not as good as CDs, for instance, but the convenience of MP3s make their mediocre aural quality “good enough.” And “good enough” means a higher margin, high-quality product is going to lose out to a more convenient lower margin alternative. All of which tells you nearly all you need to know about why digital cameras are losing out to smartphone cameras.

Unfortunately for the digital camera market, the qualitative gap between images from digital cameras and cameraphones is diminishing. As a result, the “good enough” cameraphone decision is becoming easier to justify by consumers; and not just for casual snaps, the usual province of cameraphones, but for special event and vacation photography as well.

This qualitative gap is shrinking thanks to increasingly higher resolution smartphone sensors and more powerful processors. According to Tony Henning, senior analyst for 6Sight Report, 8 megapixel cameras will comprise 21.6% of the smartphone market in 2013 and 28.9% in 2014—a total of 550 million 8MP+ units. In two years, Henning projects 12MP-equipped smartphone models will represent a fifth of the market.

Smartphone Processing Advantage
Not only has resolution been boosted in cameraphones, so have features. Smartphone cameras continue to adopt both stand-alone digicam features, such as backlit CMOS sensors to produce better low-light images, face detection, burst shooting and scene modes, as well as features specific to smartphones, like instant sharing and front-facing cameras for video chatting or self-portraits. An increasing number of front-facing imagers are multi-megapixel and able to capture HD video.

While cameraphones are limited by their small lenses and lack of optical (or any) zoom, they are aided and abetted by dual- and quad-core 1.x GHz processors that turn them into handheld computers. These powerful multifunction engines—far more powerful than the image processors found in digital cameras—enable all manner of digital imaging gymnastics, including HDR processing, instant in-camera editing and improved low-light performance.

But it’s not necessarily technology that aids a smartphone’s imaging capabilities; it’s the smartphone business model. Incorporating the powerful smartphone processors in a digital camera would substantially boost the cost of digital cameras to unaffordability. But with smartphones, the increased processor cost is subsidized by carriers. Consumers essentially buy $600–$700 smartphones on the installment plan, an arrangement digital camera makers can’t match.

Between the convenience, sharing and price advantages, no wonder consumers are turning consistently to smartphones as their primary camera.

The Top Five Smartphone Cameras
So what are the best smartphone cameras? Here are our picks for the top five.

Nokia PureView 808. Currently the gold standard in smartphone cameras, the Nokia PureView 808 is endowed with a massive 1/1.2-inch 41 megapixel image sensor, three times the size of standard 8MP sensors. But Nokia doesn’t expect consumers to shoot 41MP stills; its default setting is 5MP for 16:9 photos. Its massive sensor, however, does enable the equivalent of a 3x optical zoom lens, so you still end up with a 5MP photo after zooming rather than the shrunken resolution result you get from conventional zoomed smartphone photos. This pixel oversampling also enables 4x video zooming while maintaining Full HD 1080p resolution. The 808’s other camera attributes include Carl Zeiss optics, a five-element aspherical f/2.4 lens, a Xenon flash and an LED video light. The PureView 808 is available only in an unlocked version with a list price of $700, although it can be found for around $550. nokia.com

Apple iPhone 5. Other than the Nokia PureView 808, critics rate the iPhone 5’s 8MP imager as the best available in a smartphone, thanks to its redesigned five-element f/2.4 lens, a backside-illuminated sensor that’s protected by a sapphire lens crystal cover and the Apple-designed A6 processor that Apple claims is twice as fast for graphics. The iPhone 5 reduces noise, increases low-light performance, includes video face detection for up to 10 faces and performs still capture 40% faster than the iPhone 4S, itself the one-time state-of-the-smartphone-camera market. There have been reports of “purple haze” on photos shot with off-photo light sources (such as the sun), but many Android smartphone cameras also produce this effect. What really sets the iPhone 5 apart from its digicam and cameraphone competitors is its stupid-simple panoramic mode, which produces crystalline widescreen images of up to 28MP with no more effort then sweeping the phone across a scene for just a few seconds. AT&T, Sprint, Verizon: $199–$399, depending on the wireless plan.

Nokia Lumia 920. Thanks to PureView technology from the 808, Nokia claims the Windows Phone 8 Lumia 920 is the first subsidized smartphone with optical image stabilization. With an 8.7MP camera sensor, the Lumia 920 delivers startling bright and clear results in low light—samples look as if they’d been lit with movie lights. Nokia also included some clever Windows Phone 8 imaging software twists. For instance, cinemagraphic actually animates one section of a photo, such as a waving arm, while the rest of the image is static. The effect is startlingly cool and not nearly as spooky as it sounds. Nokia expects users will actually be able to post these cinemagraphics (technically, an animated GIF) to Facebook. Other imaging pluses are Carl Zeiss optics and a 4.5-inch PureMotion HD+ display. AT&T: $99.99 with two-year contract.

HTC Titan II. This all-new HTC bleeding-edge smartphone features a thus-far unique capability: two-way simultaneous video/still capture. Not only can consumers snap a multi-MP still while shooting 720p HD video, which many other smartphone cameras are now able to do, but HTC models, including the One X+ and the Windows Phone 8X, can grab a 5MP still from video already captured. Unlike other HTC phones, however, the Windows Phone 7.5 Titan II—the first HTC LTE model—is equipped with a 16 megapixel backlit sensor. Rumors of a successor—the Titan III—have recently surfaced since Titan II runs a last-generation OS, but whether or not it will include this phone’s 16MP sensor is anyone’s guess. The Titan II also features a shutter button and dual LED flash. AT&T: $549.99; $199.99 with contract.

Samsung Galaxy S III. This best-selling model’s 8MP camera and f/2.0 lens capture “good enough” photos compared to the other smartphones on this list. It includes a snappier-than-most shutter (it’s claimed to have absolutely zero shutter lag) and processing time, as well as HDR and face-tagging. But the GS3 is more notable for its unique photo extras. These include: best shot mode, which looks for open eyes and smiles then selects the best of eight shots; 20-shot continuous burst shooting; “buddy” photo share, which recognizes who has just been captured in a picture and prompts users to share said snap with these subjects; and share shot, which lets GS3 users automatically and instantly share photos and videos shot with other GS3 users at an event. About $700 device only—AT&T, $199.99; Sprint, $199.99; T-Mobile, $229.99; Verizon: $249.99; all with contracts.