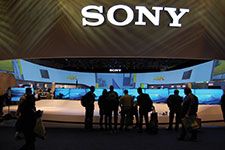 San Diego, CA—In line with its philosophy of “inspiring and fulfilling the curiosity of people around the world and moving them emotionally,” Sony’s 2015 CES booth featured products and prototypes highlighting its 4K Ultra HD technology, high-resolution audio (Hi-Res) and SmartWear.

Sony also demonstrated a new level of 4K technology that’s being integrated into its digital imaging line, starting with its FDR-X1000V Action Cam, representing a wearable style of capturing footage.

Sony highlighted its SmartWear devices that log life experiences by recording the user’s actions throughout the day. The information stored in the Lifelog app enables users to identify and improve upon daily patterns. In 2015, Sony is strengthening its ties with fashion and lifestyle brands to deliver new modes of device wearing that complement the conventional wristband-style, from headsets to eyewear, with a fuller offering of Sony and third-party services and apps.

The X1000V boasts a Zeiss Tessar lens with a 170º field of view, a BSI Exmor R CMOS sensor and a Bionz X processor. It adopts full pixel readout technology from high-end Sony cameras, allowing it to process data from all of the sensor’s pixels to create “exceptionally smooth, highly detailed 4K and HD videos” in MP4 and the XAVC S codec formats. On the audio front, wind noise reduction minimizes wind interference with the stereo microphone. For the advanced user, there are manual controls and setting adjustments, including white balance and autoexposure shifting. Plus, live streaming capabilities are provided through the U-Stream platform.

A waterproof case keeps the X1000V watertight to 33 feet, and adding the AKA-DDX1 dive door lets it focus to depths of 197 feet. It will retail for $500 packaged with the SPK-X1 waterproof case. The FDR-X1000VR bundle adds the RM-LVR2 live view remote for $600.

AS200V Action Cam. The sleek HDR-AS200V—which shares features and technologies with the X1000V, including built-in GPS, full pixel readout, improved image stabilization, clean HDMI out and upgraded manual controls—shoots Full HD 1080p video at 60p, 720p HD video at 120p and WVGA video at 240p. New to the AS200V and X1000V is “highlight movie maker,” a function that automatically produces a short, edited highlight MP4 video of a recording session, with custom background music, for instant sharing. The HDR-AS200V will sell for $300 packaged with a waterproof case and a standard tripod mount. Bundle with the RM-LVR2 live view remote, it will retail for $400.

There were other introductions for Sony’s Full HD 1080p camcorder lineup, including the HDR-PJ670 ($700), HDR-PJ440 ($400), HDR-CX440 ($300) and HDR-CX405 ($230). The entire 2015 Handycam line features XAVC S 50Mbps high-bit rate recording and either Balanced Optical Steady Shot or Optical SteadyShot technology with intelligent active mode, as well as wide-angle 26.8mm lenses. A built-in projector on select models allows for instant video playback on large surfaces, and an HDMI input allows the projector to play content from smartphones, tablets and other devices.

Live View Remote RM-LVR2. The RM-LVR2 live view LCD remote is waterproof to 10 feet and provides control over the X1000V and AS200V action cams, including start/stop recording, movie playback and deletion of unwanted files. Users can utilize Sony’s PlayMemories Mobile app (Android and iOS) to control the cam with a smart device via Wi-Fi.

Official Action Cam App. Sony announced it will release a mobile application that offers customers a simple approach to pro-level video editing. The official Action Cam app will be available for download on both Android and iOS platforms in spring 2015.

Beta Alphas
Sony also exhibited mock-ups of four upcoming full-frame FE lenses for its Alpha 7 system, as well as two wide-angle converters. With only six FE lenses to choose from at the moment, Alpha 7 owners were treated to physical evidence of these lenses that Sony initially announced on a roadmap at the 2014 photokina in September.

Firmware Update for Alpha a7 II. Sony announced a firmware update for the a7 II full-frame mirrorless camera, available for those cameras with the v1.00 software. The camera features a built-in 5-axis IS system in the body as opposed to two axes. The update includes various upgrades to this IS feature, such as image stabilization in half-pressing the shutter, in focus magnifier and in movie recording. sony.com