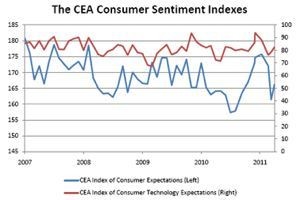 Both of CEA's measures of consumer confidence were up in April, while the Conference Board also reported positive confidence numbers in reports issued Tuesday.

“New model and product launches making headlines this month are likely driving consumer interest in spending on consumer tech,” Shawn DuBravac, CEA’s chief economist and director of research, said as part of the announcement. “New models for traditional categories, together with tablets, smartphones and gaming devices, have raised consumer sentiment heading into the second quarter of the year.”

The Conference Board's number was 65.4, up nearly two points from March and a point better than analyst expectations, Bloomberg News reported.