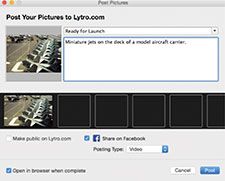 The Lytro Illum light field camera for pros and advanced enthusiasts offers photographers a unique imaging platform that is enabled by software. Much of its heavy lifting is done by computation rather than hardware, so the software has the power to continually unlock new capabilities in the camera. This allows the Illum to be a constantly evolving platform, and no matter when it was purchased, the camera is always equipped with the most up-to-date features light field photography offers.

Focus Spread. This new function enables photographers to pinpoint exactly at which depths the focus begins and ends in an image—like having two apertures in a single picture. With traditional cameras, photographers looking to achieve a full blur effect in the background of an image have to employ a very shallow depth of field, limiting the focusable range to a very narrow slice. A photo of two people, for instance, might keep the person in the foreground in focus but blur the second person as part of the background, when the photographer really wants both people in focus. The solution is the labor-intensive process of stacking multiple images at different focal lengths, which requires the subjects and scenes to remain perfectly still. With Focus Spread, a photographer can capture both subjects at different depths without sacrificing full blur effect—all with a single exposure.

It allows users to capture multiple subjects at different depths in f/16 while maintaining a background in full f/1 blur; and it breaks down the depth of field into three chunks—foreground, subject and background. Users can adjust a slider to determine where each of these areas begins and ends. The entire subject stays in focus at f/16, but the foreground and background can be stopped all the way down to f/1.

Other Desktop 4.1 features include: a histogram that provides a graphical representation of the tonal range of all the image’s pixels; a white balance dropper that calculates the proper color for the image based on the neutral calibration color selected by the user with the dropper tool; individual color saturation sliders; and a sharpening control to produce more pronounced edges and control the relative sharpening of fine vs. coarse detail.

Users can also share images as playable videos/animations on Facebook, as well as have the option to export light field pictures in the XRAW format and preview thumbnails with adjustments in real time. lytro.com