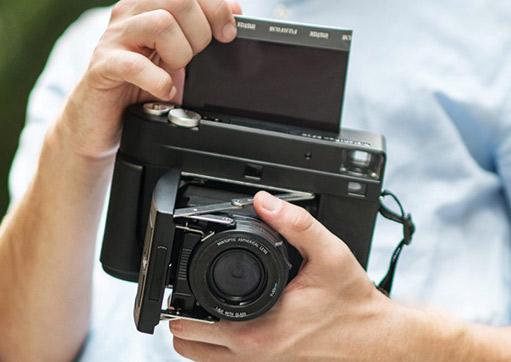 The InstantKon RF70 is designed to let photographers take control. Moreover, the rangefinder-style camera lends a nostalgic feel with its design and functionality. Indeed, it is reminiscent of a Polaroid Land camera.

The camera offers both auto and manual control. Photographers can choose total control or opt for auto and let the camera do everything.

Most notable is the ability to control depth of field with six apertures (f/5.6, f/6.7, f/8, f/11, f/16, f/22). The largest aperture of f/5.6, equivalent to f/2.4 in the 35mm format, has a 75cm minimum focus distance. Combined with the wide film format, the camera delivers remarkable bokeh with an extremely shallow depth of field.

In addition, photographers can control the amount of light they use. They can choose from 14 shutter speed settings. And with controls in the instant camera, they know how the picture turns out before it actually develops. It also offers several speed settings. This option allows photographers to shoot in the dark or in the daytime, as well as with or without flash.

Moreover, the leather-wrapped camera is compact thanks to a 0.44x rangefinder system with a real image viewfinder and collapsible bellow. It folds up into a little box that weighs 28 ounces.

Other features include: a built-in flash; external flash sync; a 2.5mm jack for external studio flashes; a tripod mount; timer mode; B mode for 10-minute exposures (and also T mode enabled by double clicking the shutter button); neutral density filters; an LCD display for ND recommendations; an eject lever for unlimited multiple exposures; and a threaded shutter button for cable releases. The camera is powered by two AA batteries

The MiNT InstantKon RF70 is now available for order with a retail price of $899.