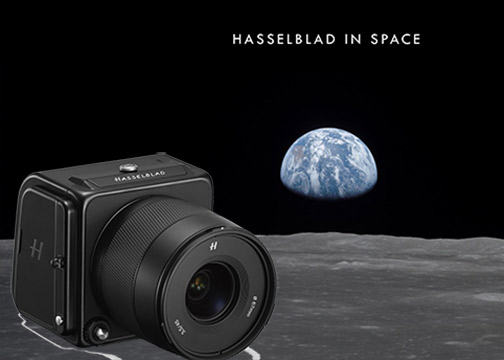 Union, NJ—Commemorating the 50th anniversary of the historic Apollo 11 moon landing, Hasselblad is celebrating its role as the camera chosen by NASA for space photography. Hasselblad cameras documented the moment the first humans landed on the Moon. In honor of the occasion, Hasselblad launched the Hasselblad 907X special edition camera. It sports a 907X camera body and CFV II 50C digital back; both are in matte black with commemorative “On the Moon Since 1969” anniversary text.

Moreover, taken down to the lunar surface, attached to astronaut Armstrong’s chest was a silver Hasselblad Data Camera (HDC). It was fitted with a Zeiss Biogon 60mm f/5,6 lens and 70mm film magazine. The magazine was never actually tested in space before that landing.

In addition, a second black Hasselblad Electric Camera (HEC) with a Zeiss Planar 80mm f/2,8 lens was used to shoot from inside the Eagle lunar module. A third black HEC also was used by astronaut Michael Collins aboard the Command Module Columbia in lunar orbit. Standing up against the intense temperatures and lack of gravity in space, the Hasselblad cameras allowed those on Earth to see what astronauts Aldrin and Armstrong experienced on the Moon.

Furthermore, HDC and HEC images have not only provided scientific insight but are legendary photos recognized the world over. It was the HEC used by Collins that was taken back to Earth, while the HDC and HEC were left on the Moon to meet narrow weight margins for successful return.

Hasselblad’s limited edition kit includes the 907X camera body and CFV II 50C digital back, both in matte black, similar to the HEC that made it back to Earth. On the digital back is the text “On the Moon Since 1969,” commemorating the HDC and HEC left behind on the lunar surface fifty years ago. Together, the 907X and CFV II 50C connect Hasselblad’s photographic history into one system.

With the 907X attached to the CFV II 50C, photographers gain access to all Hasselblad XCD lenses, providing autofocus and electronic exposure control. In addition, using the XH adapter, all HC/HCD lenses support the 907X; along with XPan and V system lenses in electronic shutter mode with the XPan and XV lens adapters, respectively. In addition, the 907X enables compatibility with a range of third-party adapters and lenses in electronic shutter mode.

Reminiscent of the classic V system film magazine design, the modern CFV II 50C also works as a stand-alone digital back. Compatible with most V system cameras made from 1957 on, the CFV II 50C works on third-party technical or view cameras.

In addition, to get the full history of Hasselblad on the Moon, download the legendary images taken on the lunar surface with the HDC and read the original 1969 press release here.