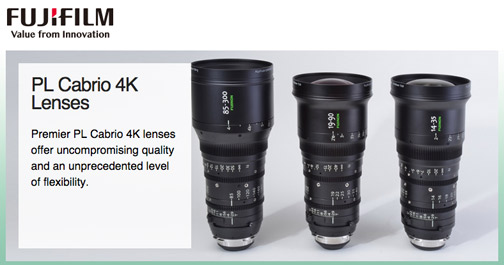 Valhalla, NY—Production of the new sitcom Zoe Ever After, set to air in early January on BET, used a style of shooting that harkens back to 1980s and 1990s sitcoms—before a more cinematic approach became the norm.

With three Fujinon 4K Cabrio PL-mount lenses—the 25–300mm Cabrio, 19–90mm Cabrio and 14–35mm Cabrio—on Sony F55 large-format cameras, the show’s DP, Bill Sheehy, operated in a multi-camera, “live-cut” environment. All three cameras covered the scene at once, but with the Sony F55 and Cabrio lenses, the show looks more like a single-camera production, in the style of Sex in the City.

Sheehy said the single operator/multiple camera method saved considerable cost and production time: “We didn’t have to worry about changing different zooms for different looks. Camera assistants didn’t spend time paring down the camera to switch from primes to zooms. We were able to use that extra time to focus on other things like lighting, while keeping a really fast pace on the set.”

The 25–300mm has a detachable servo drive for remote control of zoom, focus and iris adjustment. With that, there’s no need for rod-mounted motors. The other two Cabrios are used with SS-13 servo rear lens controller kits.

Even though production of Zoe Ever After was a multi-camera, studio-style series shot with large-format, PL-mount cameras, the crew was minimal. “We were the first sitcom to use three different Cabrios in this way and with single operators using the servo rear lens controller kits,” Sheehy explained. “The combination of lens/camera/remote lens controls was ideal for our live-cut studio production scenario.”

CINEVERSE-Atlanta, a division of VER, supplied Sheehy and crew with their camera/lens package. Sheehy said Mindy Bee (marketing executive), Mike Sippel (technical operations manager) and Fujifilm’s southeastern sales engineer, Susan Teuscher, went far above and beyond for him throughout the entire shoot: “We couldn’t have been happier with our equipment and our service from Cineverse and Fujifilm.”