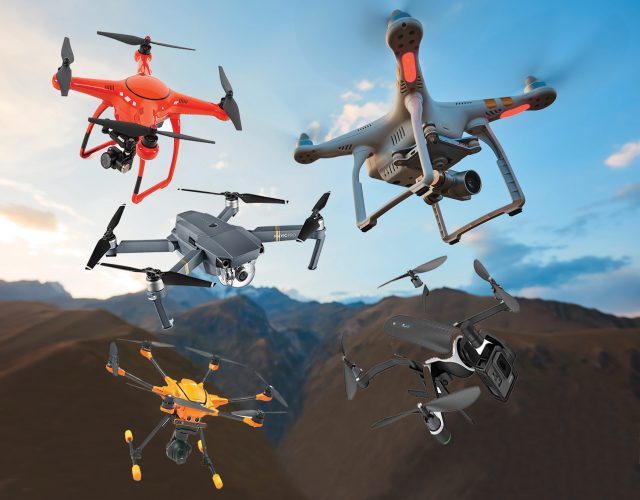 Flyinga drone can feel exhilarating, regardless of whether it’s a beginner or seasoned pilot. Part of the reason for the increased adoption of high-flying drones is the improved performance in current models.

Drones have become a pastime based on the numbers being sold to date. The Federal Aviation Administration (FAA) projects hobbyist sales will more than double from 1.9 million in 2016 to 4.3 million by 2020.

The latest drones are a more eclectic mix than what may have previously been available, indicating a growing, albeit slowly, maturity in this market.

The Mavic Pro presents a different design philosophy than DJI’s Phantom line. Its foldable form factor—to about the size of a large water bottle—makes it one of the first DJI drones that can be transported easily in a backpack.

The quadcopter’s onboard camera can record video in 4K at 30 frames per sec or Full HD 1080p at 96 fps, while also snapping still images of 12 megapixels on a 3-axis gimbal. Like other DJI drones, the Mavic Pro uses a proprietary wireless signal called OcuSync to transmit farther than Wi-Fi does. It effectively puts out a signal as far as 4.3 miles away, though the drone’s max flight distance is closer to 8 miles.

It can fly up to its top speed of 40 mph in sport mode. ActiveTrack has four sub-modes that can help the drone stick to a subject for better photo capture. Trace mode follows a subject from behind or out in front. Profile follows alongside. Spotlight keeps the camera focused on a subject no matter what direction it goes. Circle focuses the c

amera around subjects and pans a full 360º around them. Other photo niceties are burst mode, tripod mode that slows flight down, and gesture mode, where the pilot can take a selfie by waving to the drone.

Aside from the included controller, DJI does offer a first-person view (FPV) option with the separately sold DJI Goggles. The VR-like headset displays the drone’s live camera view in 1080p at 85º. $999.99. dji.com

Designed for commercial use rather than recreational, the H520 is a hexacopter with a more robust build that is partially aimed at filmmakers and broadcasters. Law enforcement, real estate and other particular verticals may also be in its wheelhouse.

Like the Typhoon H, the H520 can fly on five rotors if one has been damaged or disabled for any reason. The retractable landing gear and 360º gimbal are also carryovers from that design, allowing the CGO-CI camera to shoot unobstructed.

The difference with the camera, however, is the seven-element lens (50mm equivalent) that can shoot from a distance or up close and stay in focus for the needs of filmmakers and broadcasters. Burst, time-lapse, panoramic and metering mode upgrades are also available.

Configurations will vary, with a thermal camera (CGO-ET) being marketed toward law enforcement as well as search and rescue, or a CGO-3+ camera like the one in the Typhoon H. Either way, flight time is estimated at 31 minutes per charge, longer than the H. And the gimbal and camera can both tilt 20º upward.

Yuneec also announced a one-year warranty and 12 authorized centers for after-warranty repairs in North America for 2017. Even a dedicated hotline was started to improve customer service. $2,499–$4,999.  yuneec.com

As a fixed-wing drone, the Disco is unique in a variety of ways. Unlike quadcopters and hexacopters, it flies more like a plane—meaning it always has to be moving forward in the air.

Parrot outfitted the Disco’s nose with the same 170º camera it built into the Bebop 2. Its 14MP image sensor is capable of recording Full HD 1080p video at up to 30 fps. There is digital image stabilization, but not optical, and software optimization in the FreeFlight Pro app has improved composition.

The 32GB of internal storage is not expandable via memory card, leading pilots who shoot often to offload content over to a paired phone or tablet, or to a computer via USB. Being fixed-wing, however, means the Disco can soar in the air for at least 45 minutes on one charge, and it has a top speed of 50 mph.

The Disco comes bundled with the SkyController 2 remote and Cockpitglasses, an FPV headset that works with a variety of smartphones to stream a live view of the drone’s camera. $1,299.99. parrot.com/us

After getting off to a bumpy start with its initial launch, GoPro seems to have gotten back on track with its first drone. The premise is to integrate the company’s Hero line of action cameras into Karma’s detachable gimbal. Some retailers do bundle the drone together with the Hero5 Black.

Video and still images are based on what the attached GoPro can deliver, so the drone is only capable of shooting anything that way. The gimbal stabilizer detaches on its own, turning it into a handheld unit when coupled with a Karma Grip.

Able to fold into a dedicated case, Karma’s top speed is 35 mph and the battery lasts up to 20 minutes during flight. The included Karma controller to pilot it has a clamshell design with a 5-inch, 720p touch screen, so there is no need to use a smartphone to run the user interface or get a live view. $799.99. gopro.com

Orange also makes the X-Star Premium unique compared to the standard black, white and gray models that have generally dominated the drone category to date. Autel even ships the quadcopter with a zippered carrying case with foam interior and extra space for the drone’s accessories.

The camera is attached to a 3-axis gimbal and is capable of shooting 4K Ultra HD video and 12MP stills. The landing gear doesn’t retract, so the drone needs to essentially face what it is shooting in most circumstances, in order to get more into the 108º frame. Autel says it uses the highest quality optical glass, and there are custom camera settings available.

The included controller uses Wi-Fi, limiting range to 1.25 miles away. It includes a holder for a phone or tablet to run Autel’s Starlink app for live view, settings adjustment and to live stream 720p video. In beginner mode, speed, distance and altitude are limited, and hands-free hover is an option. The drone’s flight time is rated at up to 25 minutes, putting it in line with other quadcopters in its range. Its 64GB microSD card records two hours of 4K video. $799.99. autelrobotics.com

This drone is somewhat unusual because it flies with a smartphone attached to it. It supports both iPhone and Android devices with maximum dimensions of 160x80x10mm. The phone is nestled into a protective casing in the middle that initially angles its camera straight down. But the camera can be reoriented in the air for different perspectives, specifically to the side or directly in front.

The drone uses the onboard sensors of the phone itself to navigate and orient itself. And the camera will only be as good as the phone in use.

To assuage fears of damage, xCraft built in hardware and software contingencies to ensure the Ethos lands back safely. Shock protection and room for waterproof cases also add some peace of mind, according to the company. It even floats in case it lands or crashes in water.

It does require pairing to another phone or tablet in order to pilot the drone and view the camera live. Top speed is 35 mph with the battery lasting up to 15–20 minutes. Its smaller footprint in comparison to other drones makes it much easier to travel with as well. The Ethos will be available this spring. $299.99. xcraft.io