It can be argued that drones have now gone mainstream. Though most consumers don’t own a drone, or have even flown one, their awareness has grown considerably. What started out as basic devices that could hover and fly in straight lines have turned into smarter aerials that can fly patterns and take much better photos and video.

Content creation has become a catalyst, prompting the Federal Aviation Administration (FAA) to regulate the use of drones for commercial purposes. It also laid down rules for recreational flight, most of which are already programmed into the drones by manufacturers, thereby avoiding restricted land areas, altitude and distance.

Today’s current drones range in price yet are all dynamic in some way, offering unique features to stand out from the increasingly crowded skies.

One of the most obvious design cues on the Typhoon H drones is the retractable landing gear, which rises as the drone takes off from its launch point, lowering again as it descends to land. Complementing that is a full 360º gimbal that can fully pan around and snap 12 megapixel images or 4K UHD video from any angle without having to turn the drone’s whole body. It also records Full HD video at 120 frames per sec for slow motion video.

With six rotors instead of the usual four, the Typhoon H is effectively a hexacopter. It’s designed to fly with five, so if one is impeded in some way, the drone doesn’t lose its ability to stay in the air. Its reduced weight of 4.1 pounds also helps lower strain on the battery, thus extending flight time to up to 25 minutes.

Unlike other high-end drones, however, the Typhoon H is primarily made of carbon fiber. That could make it more susceptible to damage in case of a collision. The drone does have a front-facing proximity sensor to avoid obstacles as well as the potential to take that further with Intel RealSense technology for smarter avoidance. Piloting is made easier with the included Android-powered ST16 transmitter and ground station with a 7-inch display. The ST16 displays live footage in 720p and enables a variety of autonomous flight modes. $1,299.99. yuneec.com

With the Phantom 4, DJI focused on adding and improving autonomous flight features to its drones to avoid obstacles and follow someone. The company calls them Tap to Fly and ActiveTrack, respectively. Rather than use GPS to determine much of the drone’s flight path and ability, DJI outfitted it with imaging technology and sensors to manage those tasks.

The only catch is that the Phantom 4 needs to be facing the object or subject in order to avoid or follow it. Tap to Fly won’t work while flying sideways or backwards. This would make sense, given the three-axis gimbal below can’t fully turn 360º because of the landing gear flanking it. It could also make the drone more challenging for beginners relying on its detection. Drawing out an area on the phone or tablet mounted on the controller tells the drone what to hone in on, while tapping an object during flight highlights it as something to avoid.

The Phantom 4 also has three different flying modes: object avoidance, normal and sport. Sport mode offers a top speed of 45 mph. The drone’s camera shoots UHD 4K video at 24p or 25p, 4K video at up to 30 fps, and 1080p at up to 120 fps. It still uses DJI’s own LightBridge technology for the video downlink to the controller. $1,399. dji.com

At a much lower price point than others in this list, the Bebop 2 is the continuation of Parrot’s design and control philosophy—tweaking from its predecessor rather than replacing it. The body and certain internal components are essentially the same, albeit with a heavier body because of its 2,700 mAh onboard battery.

The larger battery pushes flight time from 12 minutes in the previous model to 25 minutes. Its 170º wide-angle camera is also similar, shooting 14MP stills and 1080p video up to 30 fps. There is no optical image stabilization, only digital image stabilization. The lens can be angled lower than before to capture more of the ground and less of the sky when need be. Also included is the same 8GB of internal storage from before, with no way to expand on that using a memory card.

Piloting is done using Wi-Fi Direct and the free FreeFlight 3 app, though range is limited this way. Parrot’s Skycontroller remote simplifies the piloting experience through joysticks and buttons. And it enables a smartphone or tablet to display the camera’s live view. It also increases the range, making it easier to potentially hit the drone’s stated top speed of 37 mph. $499.99; with Skycontroller, $699.99. parrot.com

The Hexo+ stems from a successful crowdfunding campaign that raised $1.3 million to bring the drone to market. It’s somewhat unusual in that it doesn’t come equipped with its own onboard camera. Instead it has a GoPro-specific three-axis gimbal mount that is compatible with the Hero3, Hero3+ and Hero 4.

The other key feature is that the drone doesn’t need manual piloting the entire time it’s in the air. It was designed to fly set paths for cinematic aerial footage that are accessible through the compatible iOS/Android app. This means it can fly a 360º pattern from a distance or closer. Or it can pan toward or away from the subject holding the phone or tablet. Rather than being a free-flying drone that moves at the real-time whims of the pilot, the Hexo+ is more about performing a perfect flight pattern to get the best shot. Shots and angles can be combined into one sequence as well, maintaining stability along the way.

Its top speed is rated at 45 mph, allowing the Hexo+ to stay with faster moving subjects. New features are expected to be added through quarterly firmware updates. $999. hexoplus.com

The Byrd is unique in its own right because of its modularity. The first part of that is its ability to fold. Both its legs and arms fold inward, reducing the overall size of the body to easily fit into a backpack. The camera and gimbal must be detached and stored in a separate case to fold it in.

It also has the unique distinction of being able to carry more weight than others in its class.  Its rated flight time is 30 minutes, but that can change based on how much weight it’s carrying. The type of gimbal depends on the particular Byrd model. The standard model is meant for beginners, with slightly lower battery life and 1080p video recording on GDU’s own camera. The advanced and premium models are better suited to aerial photography and cinematography. They feature GoPro functionality and 4K video recording. Their “follow me” flight ability is unlocked through the free GDU ProFlight app (iOS/Android).

The included controller is similar to DJI’s, with two arms peering out from the top to hold a smartphone/tablet. And running the app provides a live view of the action. However, using a GoPro or other camera would require their own dedicated apps to feed the signal. Standard edition, $749. prodrone-tech.com 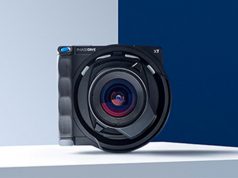