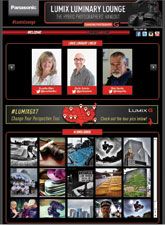 Hybrid photography, according to Panasonic, is the combining of still, video and audio as a form of photographic display in tune with the social media world. “This is the first photo community centered on a true social media experience,” the company announced in a release. “Users who join the community through various social media channels have the opportunity to interact with the Lumix Luminary photographers, a group of photography professionals and enthusiasts hand selected by Panasonic as ambassadors for the brand.”

To kick things off, the Lumix Luminary team created the GX7 Change Your Perspective Tour to promote hybrid photography to Panasonic dealers throughout the USA. As ambassadors for the Lumix G brand, the Luminary team will begin their journey in Chicago armed with the latest Lumix digital single-lens mirrorless model (compact system camera), the DMC-GX7. The GX7 enables photographers to change their viewing perspective with a high-color-accuracy, integrated, 90º tiltable LVF (live viewfinder). The Luminary photographers will post hybrid and still imagery throughout the tour and will interact with fans through tweets.

The trip is being documented on us.panasonic.com/lumixlounge, which can be viewed on a PC or any mobile device. The Lumix Luminary Lounge will also host a contest with a GX7 as the prize. panasonic.com