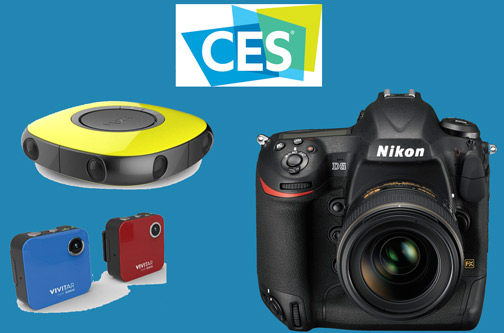 CES in Las Vegas is always a good way to start a year. With the first of its activities getting under way just three or four days after New Year’s, there isn’t a lot of time between ringing in 2016 and getting overwhelmed with new technology innovations. And overwhelming it is.

There are tens of thousands of products featured at the huge consumer electronics show. It’s virtually impossible to see all the exhibits. It’s even difficult just to categorize the products, but there are some broad-based categories that many of the products fall into. These include the Internet of Things (IoT), wearables for health care and fitness, audio and video entertainment components, and visually enabled devices.

The objective was to come up with six or so digital imaging products shown at CES 2016 that were either innovative in their capabilities or representative of emerging trends. While visually enabled devices were everywhere, and major companies like Nikon and Canon had their massive booths on the show floor, new equipment for serious photographers was somewhat limited, but impressive

There were a number of notable photographic product innovations. The Nikon D5 pro DSLR certainly deserves to be in that category. In fact, it was probably the most important announcement at the show for serious photographers.

The full-frame DSLR is designed around a 20.8 megapixel, FX-format CMOS sensor that captures up to 12 frames per second. To ensure sharp shooting, it has 153 focusing points for intelligent, high-speed subject tracking. Besides stills, it also captures 4K UHD video. Image data is optimized in its advanced Expeed 5 image-processing engine.

What really sets the D5 apart from the competition, and what makes it a trendsetter, is its light sensitivity. It has a standard ISO range of 100 to 102,400, which is very good. But there are other cameras that have such a wide range. What these other cameras don’t have is the six-stop extended ISO range (one lower and five higher) that the D5 provides. At its very highest extended setting, it reaches an unbelievable ISO 3,280,000. One Nikon executive told me that when engineers first showed him the specs, he thought they had misplaced the decimal point and the extended range was 328,000. But it truly is over three million, making it possible to capture details and colors beyond the limits of the human eye.

Admittedly, the quality of the images being captured degrades with each additional extended stop, but it’s still remarkable to be able to capture any image at a light level that would require such a high ISO. The D5 will ship in March with a price tag of $6,499.95. nikonusa.com

Traditionally, long telephoto lenses have generally been very large—and heavy. The Panasonic Lumix G 100–400mm Leica DG Vario-Elmar lens is changing that. It’s a very functional piece of equipment that can fit into just about any camera case, without weighing down a photographer on the run. This compact 100–400mm Micro Four Thirds lens, which is not much longer or much heavier than what a 200mm lens might be, has an equivalent coverage of 200–800mm. The lens was designed with 20 elements in 13 groups, including advanced aspherical and low dispersion glass. It’s weatherized for use in harsh conditions, features built-in optical image stabilization and has an f-stop range that goes from f/4 at 100mm to f/6.3 at 400mm. The SRP for the Panasonic Lumix G 100–400mm Leica DG Vario-Elmar is $1,799.99. panasonic.com

It was rumored Canon, the traditional leader in the ultra-zoom P&S category with its SX line, was going to be releasing a 100x zoom camera. That however didn’t happen. Instead, it debuted a higher resolution version of its 50x zoom—the Canon PowerShot SX540 HS. The company wouldn’t comment on whether a 100x model was in development.

The SX540 HS features a 24–1200mm zoom range, a 20.3MP High Sensitivity CMOS sensor, a Digic 6 processor and built-in Wi-Fi and NFC connectivity. Its new zoom framing assist function detects when users are panning (for instance, to search for the location of a soccer ball) and automatically zooms out to help; stop panning and the zoom returns to its original position. It also keeps the subject’s face the same size in the frame, no matter how they move. $399.99. usa.canon.com

Also shown was the Kodak PixPro Astro Zoom AZ901, which does comes close to the 100x range. It features a full 90x optical zoom, which is the 35mm equivalent of 19.5–1775mm. With its added 4x digital zoom capabilities, it has an incredible maximum super-telephoto range of 7020mm. Shooting at such extensive zoom ranges can make it difficult to keep steady while shooting, even with the camera’s built-in optical image stabilization. But being able to get in as close as that camera can makes any minor shooting difficulties worth it.

Things Are Getting Smaller

Miniaturization was a strong trend at the show. Cameras are getting smaller and smaller to accommodate the diverse uses they’re being put to, from being sent into the sky attached to drones to being used as pet cams.

Sony, for example, released a couple of very compact action camcorders—the HDR-AS50 and the HDR-AS50R; the latter comes with a wristband live view remote.

But Vivitar had some of smallest cameras at CES. They’re at the other end of the photographic spectrum from the D5, yet they still have some interesting capabilities and innovations. The smallest model in the line is the Vivitar MicroCam Air DVR939HD. This ultrathin, wearable camcorder is packed with features, including Wi-Fi, Bluetooth and a built-in clip mount. There is also a selection of external mounting accessories. The matchbox-sized camera is equipped with a 160º field-of-view fixed lens with 3x digital zoom capabilities. It can capture 10MP still images and Full HD 1080p video. A microSD slot supports up to 32GB of expandable memory.

To operate, it’s simply a matter of pressing the on/off or record button on the camera, then using the free smartphone companion app to control the unit and view or replay the captured images and video footage. It’s possible to instantly upload captured data from any Wi-Fi enabled smartphone, tablet or other device. That makes it easy to share images on social media and websites, a capability that’s become a virtual must for consumer cameras. $79.99. vivitar.com

Controlling miniature and/or remote cameras through smartphones or tablets with Wi-Fi or Bluetooth is becoming the norm. That lets manufacturers design cameras sans built-in screens without sacrificing image preview and review capabilities. And it lets users see what the cameras are seeing, regardless of their relative positions.

This was the year for consumer virtual reality, or spherical, equipment at CES. There was a wide range of new and improved products shown. Nikon announced the Nikon KeyMission 360 VR camera, Kodak showed its SP360 4K action cam and IC Realtech featured its 360ºx360º ALLie video camera.

The one 360º VR camera that was a little different from the competition was HumanEyes Technologies’ Vuze 3D, 360º spherical camera. It’s a platter-shaped camera about the size of the smallest portable compact disk player. It has a spherical 4K video resolution at 30 frames per second. Its eight ultrawide lenses with 180ºx120º coverage also offer 360ºx180º spherical views. The Vuze 3D ships with a mini tripod that can be used as a monopod. It also comes with a VR headset to view the captured 3D video and still images. It supports SD cards and includes a smartphone app that is used to control the camera. vuze.camera

Whether working with computers, tablets, smartphones or cameras, power is always an issue. There were all sorts of wireless and wired charging innovations demonstrated at the show. (A digital camera without power is basically just an interesting paperweight.)

One company that has moved toward attacking the power problem is Activeon. It showed the Activeon 4K Solar X action camera that includes a unique solar-charging solution. The cam can take 16MP images and has a burst rate of 6 fps. It also records 4K video at 2,160p. The small camera has a 2-inch touch screen, built-in Wi-Fi and digital image stabilization. Its seven-element, f/2.4 glass lens provides four different levels of field of view.

Additonally, the camera is compatible with 40 optional accessories. The Solar X camera connects with Activeon’s X Station—a solar panel case that absorbs and stores energy from the sun. Utilizing Burst Speed Charging technology, the X Station can charge the Solar X to 80% in 30 minutes and 100% in 60 minutes. The Solar X provides two hours of battery life from its built-in battery. And users can get an additional four hours with a fully charged X Station. It’s due out in March for $399. activeon.com 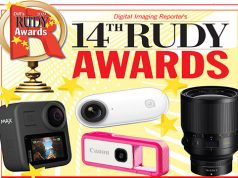