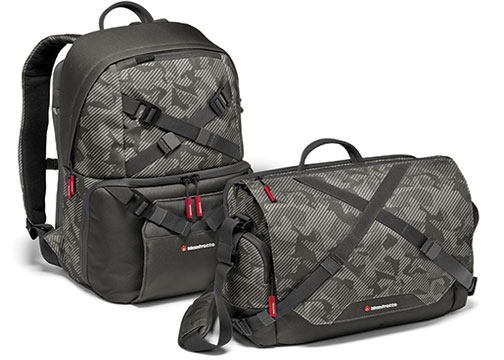 “The Noreg Collection’s cool colorways combine with minimalist shapes and premium textures around a core feature that references a key element of Scandinavian design: modularity. Noreg carrying solutions are designed to keep all your photography kit and essentials with you wherever you go,” the company announced.

Manfrotto’s Noreg Backpack-30 and Noreg Messenger-30 both contain a modular system consisting of two detachable parts that function independently. The units are a laptop sleeve and an internal camera unit.

Both bags fit a premium mirrorless camera with standard zoom lens attached plus up to two additional lenses, depending on size, or one other lens, such as a 70–200 mm f/4. They can also fit a DJI Mavic Pro combo kit. In addition, Noreg bags feature the Manfrotto Protection System to protect gear from shock, as well as smart gear organization and ergonomics.

Moreover, the laptop compartment, located on the back for security, accommodates a 15-inch laptop and up to a 9.7-inch tablet. It also can be detached and used as a stand-alone sleeve. Furthermore, Noreg bags integrate a travel tripod holder and are carry-on size.

Their outer fabric is water repellent and treated to withstand adverse weather conditions. Plus, a rain cover is included with each Noreg camera bag. The bags’ camouflage texture and cross-positioned straps add a sense of personal style.