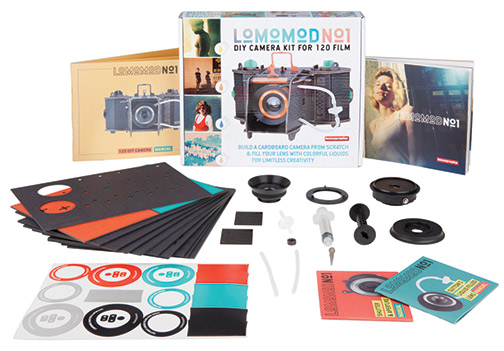 New York, NY—Lomography released the combination of two brand-new products in one: the Sutton liquid-filled lens with a shutter and aperture unit; and the medium-format LomoMod No. 1 camera. The DIY camera, which can be built entirely from scratch, is made from sustainable cardboard.

“Together, they are a whole new way of thinking about photography. Not only an environmentally conscious way to build a camera from scratch, but a process that invites endless creativity from the very start,” Lomography announced.

The LomoMod No. 1 is made from sustainable cardboard for a planet-conscious construction. Arriving in flat-packed cardboard sheets with a two-sided pattern (UV pattern or matte black), it is built completely from the bottom up by the photographer. Its precision laser-cut pieces draw their inspiration from the traditions of origami and Sashimono carpentry. Moreover, it requires no screws or glue.

In addition, the sustainable cardboard base means users can recut or edit spare or new parts. Lomo says the kit allows photographers to understand the roots and basic grounding of the concept of photography. But it also enables creativity, as they can redesign and customize the outside of the camera in infinite ways. 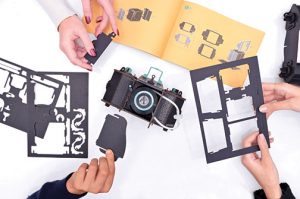 However, creativity doesn’t end with the build. The LomoMod No.1 comes with a shutter and aperture module to shoot in both normal and bulb mode. It also features a PC sync for flash shooting and special aperture plates to achieve even quirkier results.

Other tech specs include: separate Waterhouse aperture units; a focus distance of 2.5 meters to infinity; shutter speeds of N (1/100), B (bulb), T shutter; a tripod mount; and a cable release socket.

If photographers want to experiment further, they can try to convert the camera into a pinhole; adapt the included Sutton lens to other camera bodies; or use the LomoMod No.1 with other lenses.

Moreover, to experience the full essence of analog photography, photographers can build the camera, shooting with it, self-develop and scan. In short, they can experience the entire creative process.

Touted as “perhaps the wildest and most innovative lens in the world,” the 80mm f/11 lens pays homage to Victorian photographer Thomas Sutton’s eccentric invention; Sutton was inspired by the snow globe. This lens’s unique liquid-based focus is a source of experimentation that marries perfectly with the LomoMod No. 1 camera.

The liquid through which the lens focuses is easily changed to produce a variety of effects and deviations. Whether users fill it with food coloring or orange juice, the lens creates an unexplored realm of photography.

Lomography has included everything experimental analog photographers need to explore their creativity. The kit contains: 11 sheets of cardboard cutouts; 1 sheet containing aperture plates; the Sutton lens module; an aperture and shutter module; a 120 film spool; a tripod nut; a tube, syringe and valve; colorful stickers; and a photo book as well as user manual. 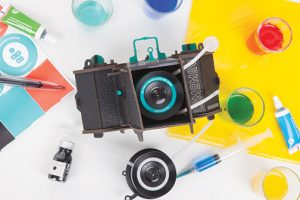