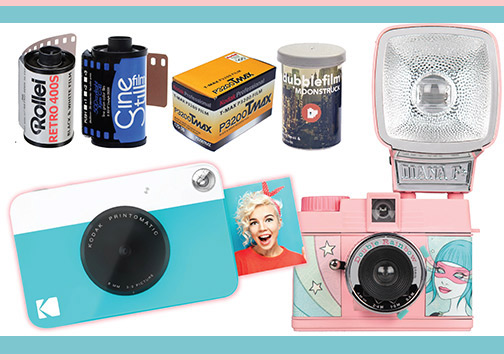 Perhaps the clearest indication that analog photography is on an upsurge is that people no longer ask me, “Do they still make 35mm film?” They sure did a few years back. However, these days they don’t even look astonished when I tell them that 35mm color print film and one-time-use film cameras are readily available at Walmart.

Film will never replace digital as the primary image capture medium again. However, thanks to pro photographers promoting the classic film look and enthusiasts embracing the enhanced involvement of shooting film, analog photography is doing quite well as a niche. Moreover, it’s unlikely to be relegated to the dustbin of history anytime soon. Indeed, people under 35 comprise a healthy slice of the overall analog market, and that bodes well for its long-term future.

Definitive stats for worldwide film sales are hard to come by, but the consensus is that they peaked at about one billion rolls around 2002 and dropped off precipitously to 20 million rolls in 2016. Ever since then, they’ve been on a definite upward curve. In addition, according to most experts, film sales are steadily increasing by about 5% per year.

For a view of what’s happening out there in retail land in 2019, I contacted a dozen photo specialty retailers across the country. I asked them for their off-the-record comments on the analog sector. Here’s what they said.

2. The most popular conventional film types were black-and-white and color negative (C-41) film, each at roughly 50% of the market. Color transparency film was a distant third. Polaroid as well as Fujifilm instant films sold very well. Furthermore, they would be in second place among all films if they were included in the overall film sales stats. In addition, 35mm film was far and away the most popular film size, although 120 roll film and 4×5 and 8×10 sheet film sizes were also steady sellers; 120 film sales posted a modest increase.

3. Photographic paper and chemicals, developing tanks, trays and other darkroom equipment continued to sell steadily. Indeed, they experienced a slight increase in about half of the stores we surveyed. However, few stores carry new enlargers or slide projectors because used ones are readily available at bargain prices.

According to one source, film shooters now have a choice of more than 200 different emulsions. That incredible statistic may well be true if you include tiny off brands and rebranded films; however, many large camera stores in the U.S. do offer scores of enticing options for film shooters. In addition, some are pretty exotic. Here’s a quick rundown of what’s out there on film shelves.

This daylight-balanced ISO 100 35mm color transparency film is a much improved reintroduction. It is the successor to the original Ektachrome 100 that was discontinued in 2012 and out of production for about five years. It has an extremely fine grain structure, vibrant color rendering and overall low-contrast profile. The latter contributes to its wide dynamic range, neutral tonal scale as well as greater color fidelity. When developed in E-6 chemistry, its smooth grain and optimized T-grain structure make it great for scanning applications.

This Rollei panchromatic black-and-white 35mm negative film has a nominal ISO of 400. It also features an extended infrared sensitivity for producing “unique halation effects that can be controlled by varying the exposure.” In addition, it offers an extended exposure latitude, high sharpness and acutance. Moreover, its polyester base was tested to a life expectancy of 500 years, earning it an archival rating. Also, its clear base makes it a great choice for scanning.

An ISO 50 color negative film, it captures still images with a cinematic image quality. Basically, CineStill reformatted movie stock that’s been prepared and packaged for use in still cameras. It also utilizes a unique “premoval” stage to remove the traditional antihalation rem-jet layer. As a result, it develops in C-41 chemistry or a standard motion picture ECN-2 process.

This Kodak film was reintroduced to the market a while back to the cheers of available-light film fans. This ultrahigh-speed ISO 3200 panchromatic black-and-white negative film has a unique T-grain emulsion as well as a relatively fine grain structure. It also achieves high sharpness, considering its speed.

It’s actually classified as a multispeed film because of its extremely wide exposure latitude and it can be exposed at ISO settings of 400–25,000 when pushed or pulled. Its versatility and speed make it great for shooting handheld in very low light and capturing fast-moving subjects.

In addition, its fine grain profile, broad tonal range and high resolving power make it a good choice for scanning and enlarging applications.

To conclude with something completely different, here’s an experimental color negative film from Dubblefilm that delivers “unconventional and surprising muted multicolored effects.” They vary depending on the shooting conditions!

Created by hand using the Reanimator device, this film’s unique effects lend a distinct and creative appearance to photographs. In addition, it’s available in 35mm, has a nominal speed of ISO 200 and is processed in standard C-41 chemistry.

Everyone from teens and millennials to seniors seems to be captivated by instant picture photography. And the number as well as diversity of instant cameras are expanding. That’s probably because they deliver the unmatched combination of immediate gratification like digital photography plus the tactile presence of an old-fashioned physical print.

Let’s take a closer look at 10 cameras in this fascinating upmarket category.

Assertively styled in a minimalist contemporary vein, Fujifilm’s SQ6 is simple, straightforward and fun. It uses Fujifilm Instax Square film that produces 2.4×2.4-inch square prints. In addition, it incorporates a 65.75mm f/12.6 lens that offers a choice of three focusing zones. They include macro mode, which provides a minimum focusing distance of 11.8 inches. Other key features include: a 0.4x optical viewfinder with target spot; autoexposure control with a +/- 2/3-stop lighten/darken control and double exposure mode; and a built-in electronic flash. It also has a selfie mirror integrated into the lens surround.

With style and functions that pay homage to the classic twin-lens Rolleiflex, this elegant little retro TLR from MiNT takes Fujifilm Instax mini film. It features a vintage waist-level viewfinder with a flip-up magnifier. And its 3-element 61mm f/5.6 lens uses three aspheric elements and stops down to f/22. In addition, it provides shutter speeds of 1–1/500 sec plus B exposures up to 10 sec, as well as an integrated light meter.

The camera takes i-Type and 600 instant film. Moreover, its 106mm lens maintains sharp focus from 2 feet to infinity. It also has a built-in flash and self-timer. The OneStep 2 comes with a USB cable for charging its built-in 1300mAh Li-ion battery pack. $99.99–$139.99.

The Wide 300 also features a 0.37x optical viewfinder with target spot; autoexposure via the programmed shutter; a film pack window; a +/- 2–3 EV lighten-darken control; and a tripod socket. An LCD screen displays the number of shots remaining, exposure compensation and also flash mode. It comes with a close-up lens adapter and runs on four AA batteries. $99.99.

This ultra-hip kit includes a Lomography camera, which has a 90mm-equivalent lens. The integral lens features apertures of f/8 and f/22 and three focus zones. Also included are a 21mm-equivalent ultrawide attachment with matching viewfinder; a close-up lens attachment that lets users shoot subjects as close as 3.9 inches; a dedicated Splitzer that combines two images on a single frame; and a lens cap that doubles as a remote control.

The programmed autoexposure camera has tripod and PC flash sockets as well as a small mirror for composing selfies. It also provides +/-1-stop exposure compensation and bulb mode for long exposures. Moreover, it comes with four colored gels for creating special effects and a set of shooting technique cards. Four AA cells provide the power, and it uses Fujifilm Instax Wide film that produces 3.9×2.4-inch prints. $199.

This digital instant camera from Kodak is an ingenious, pocket-size point-and-shoot model with a 10MP sensor and an 8mm f/2 lens. It captures images to a microSD card as well as prints out borderless 2×3-inch prints directly from the camera, without a computer, on ZINK (zero ink) paper. The camera has an optical viewfinder, a built-in flash and built-in autofocus.

A refurbished masterpiece of vintage technology, this elegant folding SLR in silver and brown focuses its 4-element, 116mm f/8 glass lens via a geared wheel. It provides automatic variable shutter speeds from 1/180 sec to 5 sec as well as apertures from f/8 to f/90.

In addition, it takes SX-70 Type instant film and has a flashbar slot. It’s fitted with a new film shield from Polaroid Originals and is powered by an integral battery in each film pack. $429.99.

This little cutie from Fujifilm produces credit-card-size prints and has a 60mm f/12.7–32 Fujinon lens that’s in focus from 2 feet to infinity. It also provides an optical viewfinder with target spot, a built-in flash and an autoexposure mode. In addition, it sports a selfie mirror on its lens surround.

Other features include a manual brightness adjustment as well as a creative high-key mode. In addition, it comes with a macro lens attachment for close-ups. It’s available in flamingo pink, cobalt blue, ice blue, lime green and smoky white. $69.99.

Type “film cameras” into the search bar of virtually any major camera retailer’s website and dozens of new traditional film cameras come up. They comprise 35mm, medium-format, large-format, pinhole and one-time-use cameras. The non-disposables among them include low-end plastic roll film “art” cameras like the Holga and Diana as well as simple basic 35s that sell for under 50 bucks. The category extends to iconic classics like the Leica MP ($4,795 body only in silver or black), the last-of-the-breed flagship film Nikon F6 ($2,549 body only) and the redoubtable Linhof 6x9cm Technikardan 23S ($6,699.99 body only).

There are also dozens of new 4×5 and 8×10 view cameras; some available on special order, made by such venerable manufacturers as Arca-Swiss, Linhof, Toyo and Wista. While the unit sales figures for any of these traditional cameras is in no way comparable to their digital counterparts, they are nevertheless a testament to photographers’ continuing fascination with and commitment to analog photography that has experienced an uptick over the past few years.

Who would have believed 10 years ago that Kodak’s reintroduction of Ektachrome would have sparked a renewed interest in transparency film?

Another leading indicator of the analog upsurge is the dramatic rise in sales figures for used film cameras, especially those of high quality. As a result, selling prices for some models have escalated at a brisk pace. Moreover, this is especially true of highly regarded classics, such as Rolleiflex twin-lens reflexes; Hasselblads; the Nikon FM3A; Canon New F-1 and EOS-3; Pentax LX; as well as Nikon and Canon rangefinder 35s and, of course, Leica Ms.

On a more modest scale, prices and sales of bread-and-butter manual mechanical SLRs like the Pentax Spotmatic and K1000, Nikon FM2 and Olympus OM-1 also have increased noticeably in the past year or so. Indeed, the used camera guy at one large camera store told me the demand for used film cameras was so great he could hardly keep some models in stock!

Undoubtedly some of the folks snapping up these analog masterpieces are collectors. However, a surprising percentage are running film through them and having it developed and scanned or printed. Despite the fond wishes of traditionalists, analog photography will never replace the supreme convenience and flexibility of digital capture. But film fans can rejoice that it’s now hip to shoot film again. And more people than ever are having fun doing it.