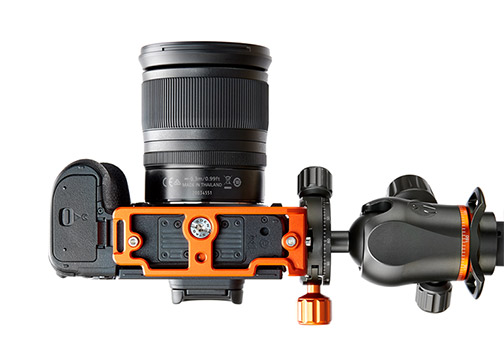 “It is a testament to how far we have come as a company that we were contacted by Nikon in August, a few hours after the announcement of the Z-series cameras, to develop and manufacture a camera-specific L bracket,” said Danny Lenihan, 3 Legged Thing’s founder and CEO.

“It’s been a fantastic challenge for 3 Legged Thing. It’s difficult for me to express how proud I am of this little brand, that we are commanding audiences with globally-renowned companies like Nikon.”

Precision milled from a single block of aircraft-grade magnesium alloy, Zelda fits both the Z 6 and Z 7 bodies. Moreover, it allows full access to the battery door, memory card slot and side ports with the bracket in place.

The Arca-Swiss compatible L bracket is shaped with indents to permit users to easily access and tilt the camera’s rear screen. In addition, it provides easy access to the lens release button on the front of the unit.

As with 3 Legged Thing’s QR11 universal L brackets, Zelda features a single 1⁄4″-20 thread on the vertical aspect. This enables the attachment of accessories like a sling-strap or microphone. The bracket also attaches to the camera using a 1⁄4″-20 stainless steel Stagsden bolt. Its included locator pin fits directly into the base of the camera.

Moreover, Zelda has security screws on its horizontal and vertical aspects for extra security when mounted on a tripod. A 1⁄4″-20 screw thread integrated into the base of the bracket also allows it to be directly connected to any mount of that size.

“It’s been great working with Danny and the team at 3 Legged Thing on the brilliant L bracket for our new Nikon Z series,” commented Jeremy Gilbert, director of Marketing for Nikon UK. “Having had the prototype for a while, it’s definitely one of the most useful accessories we’ve used. I’d happily give it my personal recommendation as a piece of kit you’re unlikely to take off your camera.

“We’re pleased to have been able to work with a fantastic British brand to make this happen. We also are confident our customers will love having it as part of their shooting setup.”