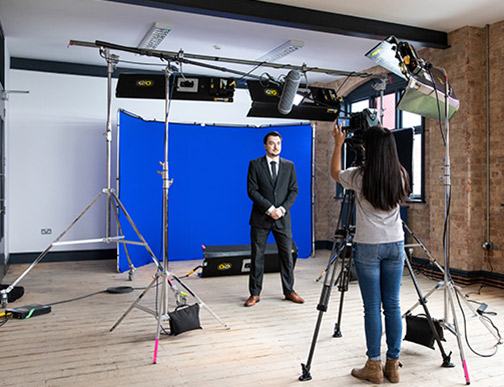 The Lastolite Panoramic Background is a collapsible 13-foot (4m) wide by 7-foot, 5-inch (2.3m) high background. It folds down into its own carry case that fits into a car. Weighing in at 19.8 pounds, the background is marketed to image makers on the move.

Moreover, completely self-supporting, it sets up in minutes. The structure comprises three individual aluminum-framed sections; they are connected together with a hinge clip to allow the background to be set up flat and lean against a wall. Or the side frames fold in to create a wraparound effect. Furthermore, the Chroma Key Blue cover clips to the aluminum frame and creates a taught, seamless surface.

The background is convenient for livestream and postproduction keying projects. In addition, its 13-foot width creates enough working area for multiple camera angles and subjects. Although the brushed fabric is nonreflective, the height and width combined is enough to place the subject(s) at a good working distance from the background, thus eliminating any color spill from the Chroma Key Blue surface.

“Whether you are shooting a single person, a larger group or even products, the Lastolite Panoramic Background offers ultimate versatility,” the company announced. “The wider format allows the image maker to introduce props and accommodate animated poses from the likes of dancers or athletes.”

Lastolite started out in 1978 with a handful of employees and one product—the original “pop-up” circular reflector. The Vitec Group PLC acquired Lastolite in 2011. As a result, it became part of a large imaging group, alongside other brands such as Manfrotto, Lowepro, Joby, Gitzo, Avenger and Colorama.

In 2015, Lastolite partnered with Manfrotto and became Lastolite By Manfrotto.