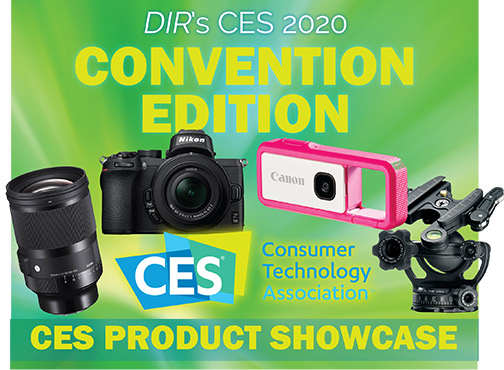 An exclusive feature of Digital Imaging Reporter’s convention coverage, the 2020 CES Product Showcase shines a light on a sample of recently introduced and noteworthy photo-imaging gear.

For professional field shooting, the lens has two UED (ultra-extra-low dispersion) lenses as well as three ED lenses in a 22-element 17-group configuration. They effectively suppress axial chromatic and chromatic aberrations. Moreover, astigmatism is corrected with an aspherical lens. It also adopts a double focus system to suppress fluctuation of aberration, even at close distances.

Its DX-format 20.9MP CMOS sensor and Expeed 6 processor deliver a native sensitivity range of ISO 100–51,200 (stills); it extends to an ISO 204,800 equivalent for low-light photography. The Z 50 achieves 11-fps (AF/AE) bursts and records Full HD video from a cinematic 24 fps to 100 fps. It also records 4K video with stabilization, as well as 120p slow-motion, time-lapse and interval-timer shooting.

The dustproof, splashproof, freezeproof body has a refined grip and retooled mode dial. The 20MP sensor from the E-M1 Mark II is maximized by a TruePic VIII processor. With 121-point all-cross phase-detection AF, users select from six target options. Touch shutter/touch AF operation is enabled using the touch pad, even while tracking subjects. Notable are 30-fps bursts and C 4K 24p, Full HD 30p/60p and All-Intra video recording; information from the AF sensor is used for focusing when recording. Combining 5-axis IS with electronic IS makes it possible to record stable video without stabilization equipment.

The Canon PowerShot G7 X Mark III and G5 X Mark II P&S cameras have individualized qualities but share core features: a 20.1MP, 1.0-inch stacked CMOS sensor; a Digic 8 processor; 4K video recording up to 30p; and Full HD recording at 60p/120p. Additionally, they offer HDR functionality and high frame rate movies with no crop. Both also achieve 20-fps continuous shooting and have the highest ISO sensitivities in the PowerShot category, up to ISO 12,800. In addition to a USB-C charging supply, they offer Wi-Fi/Bluetooth connectivity.

The Lowel Blender XL is a next-generation bicolor lighting fixture from Tiffen. The device employs surface mount LEDs with an output that’s almost four times a traditional one-by-one panel. The photo/video light fixture provides 98 CRI output in a rugged, compact package. Moreover, it is powered through a switchable AC/DC power supply that accepts professional V-mount batteries for use nearly anywhere.

The steel and aluminum fixture is also a stand-alone option for a variety of production needs. However, when combined in a three-light kit with case and accessories, it becomes an on-the-go lighting package. $379.

Rokinon’s AF 14mm f/2.8 full-frame lens for the Canon RF mount has a 113.9º ultrawide angle view. “Currently, Canon R series camera users have to utilize an EF/EF-S type lens plus an expensive mount adapter to enjoy the performance of an autofocusing ultrawide-angle prime lens,” Rokinon stated. “The resulting size and weight are not ideal for a mirrorless camera. However, the new AF Rokinon is designed exclusively to prioritize the user experience of mirrorless cameras.”

By reducing the length of the flange back, the lens’s length and weight were also reduced, enhancing balance and usability. This also allows for faster, quieter AF. The RF-mount lens offers a bright f/2.8 aperture, and a rounded 7-blade aperture helps produce pleasing bokeh and star effects.

From JK Imaging Ltd., the newest Kodak PixPro waterproof camera, the PixPro WPZ2, adds another affordable option for photographers and adventurers of all ages. The WPZ2 is designed with an attractive rugged exterior, which sports the iconic and recognized Kodak brand yellow color.

The camera is shockproof, dustproof as well as adventure ready. The rugged point-and-shoot model was built for on-the-go photographers and to operate in, on and under the water.

In addition, it provides scene modes to help photographers capture the best shot along with 1080p Full HD video. The camera works fully submerged in up to 49 feet of water. Its durable build is resistant to dirt and dust with a JIS/IEC rating of IP6X. Moreover, the camera is shockproof to withstand a fall of up to 6.6 feet.

The Alpha 6600 mirrorless camera brings Sony imaging technologies to a compact APS-C-format body. It employs a 24.2MP Exmor CMOS sensor, a Bionz X processor and a front-end LSI implemented in Sony’s full-frame cameras. They boast a 0.02-sec AF acquisition time and utilize 425 focal-plane phase-detection points covering 84% of the image along with 425 contrast-detection points.

The Lume Cube 2.0 LED light has an aluminum housing and is waterproof to 30 feet. The light pairs with a camera, drone, smartphone or other content creation devices to achieve better lighting. It measures 1.6×1.6 inches and is the size of a golf ball.

Other features: wireless control via the Lume-X app (60 feet); a 360º optical sensor for slave flash capability; a 1/4″ 20 connection. The light comes with a modification frame for mounting gels/diffusers; a magnetic softening diffuser; a magnetic warming CTO gel; a DSLR mount; and a USB-C cable. $89.99.

Thanks to being waterproof (33 ft.), freezeproof (14ºF) and shockproof (6 ft.), this Nikon point-and-shoot camera allows photographers of all levels to capture and share adventures. It boasts a simple menu and unique scene modes. At its heart are a 13.2MP low-light CMOS sensor and 30–90mm f/3.3–5.9 (equivalent), 3x zoom Nikkor glass lens. It also captures Full HD 1080p video with stereo sound and provides a 2.7-inch LCD and target-finding autofocus.

Users can select the “shoot under water” setting and the W150 does the rest. There’s also an underwater face-framing setting that automatically detects faces. And before photographers share their shots, the camera’s “add clarity under water” editing function corrects overly blue hues and adds clarity to underwater images. Other features: special effects, like adding bubbles to a photo; a picture-in-picture function makes images appear as if they were taken on an instant print camera; decorative frames and stamps; and SnapBridge with Wi-Fi and Bluetooth. $169.95.

The Canon Ivy Rec clippable camera is designed for adventure. The ultracompact Ivy Rec is waterproof down to 6.6 feet (30 minutes) and shockproof enough to withstand a 6.6-foot fall. Built for the outdoors, the wearable camera can clip on a belt or bag. And the clip doubles as a viewfinder—eliminating the potential to crack a screen. The camera records video in 720p or 1080p for 10 minutes.

With one-click capture for photos and videos, the Ivy Rec pairs with the optional Canon Mini Cam app (iOS/Android) via Wi-Fi and Bluetooth. In addtion, when the app is connected to a mobile device, users can keep informed about settings. This includes battery life; capacity on the MicroSD card; recording resolution; as well as image size. Snapshooters can also use the app as a live viewfinder—or as a remote shutter. Via the app, content can be transferred to a mobile device to print and share. $129.99.

Acratech’s GXP ball head is a lightweight, rugged tripod head that holds 50 pounds and weighs one pound. Moreover, extra-fine tension control lets photographers dial in the correct amount of friction on the ball for maximum camera control and smooth movements.

“When shooting stitched panoramic images, you will often need to return to the starting point of your first shot of your sequence. With our unique zero pointer, it’s always quick and easy to set a zero point and return right back to it,” the company notes.

The GXP functions as a ball head, a gimbal head and also a leveling panoramic head. The gimbal works with any lens, up to 400mm f/4.0, with a tripod collar. Photographers can also unscrew the clamp and put it onto the head’s bottom to create level, single-row panoramas. $445.

Spectacles 3, the latest version of Snap’s Spectacles sunglasses, has dual HD cameras to empower creativity in 3D. It captures depth and dimension the way the human eye does, providing a 3D canvas for a suite of 3D effects on Snapchat. Captured Snaps transfer in HD to “memories” within Snapchat to add lighting, landscapes and effects with a swipe. Snaps also export to a camera roll as circular, horizontal, square and VR formats, where they can be saved, edited and shared.

Users can tap either button for video (60 seconds continuously) or press and hold for still capture. And high-fidelity audio is possible via a four-microphone array. Additionally, LED indicator lights notify people when recording; users also see a light. 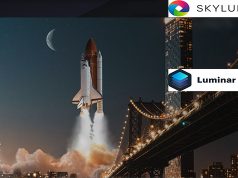