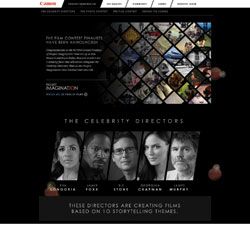 Melville, NY—Canon USA announced 20 finalists from the Project Imaginat10n film contest where amateurs and hobbyists were invited to sit in the director’s chair, showcasing their storytelling abilities by creating a short film inspired by a series of crowd-sourced photographs.

In the coming weeks, Ron Howard and Bryce Dallas Howard, the first “graduating” director of the Project Imagin8ion experiment, will narrow the finalists down to five winning directors. Packaged together as “A Ron Howard Presentation,” the five consumer and five celebrity films will be featured at Canon’s Project Imaginat10n Film Festival in fall 2013.

“Project Imaginat10n has enabled artistry among filmmakers of all levels and inspired people in the most contrasting disciplines to pursue filmmaking, completely redefining ‘art’ and proving that ‘we’re all creative,’” said Ron Howard. “For year two, it was important to me to open the experiment to the masses, especially at film schools where Bryce had the opportunity to share her experience.”

“This exercise continues to prove that creativity and collaboration generate endless possibilities that mark the state of our time,” added Bryce Dallas Howard. “All you need is some basic equipment, an imagination and a burning desire to tell a story.” Howard is one of Hollywood’s most versatile young talents, both on screen and behind the camera. The actress most recently starred as the villainous “Hilly” in Tate Taylor’s big-screen adaptation of Kathryn Stockett’s best-selling novel The Help.

The consumer directed films can be viewed at imagination.usa.canon.com. The five winning filmmakers will be announced in September 2013. usa.canon.com