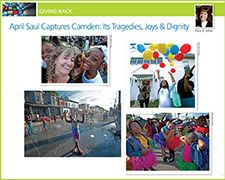 Pulitzer Prize-winning Philadelphia Inquirer staff photographer April Saul has dedicated the past year to a single project: documenting life in Camden, New Jersey. She is putting a human face on the city’s struggles, primarily by capturing the crises and victories of its youngest residents.

Saul was able to work full-time in Camden thanks to receiving an Alicia Patterson Foundation Fellowship, a National Press Photographers Association Short Grant and support from the Inquirer, which has helped subsidize her project.

When she began applying for grants in 2103, Saul figured, “Here was a city only four miles from my home, which I cared deeply about and was ranked the poorest and most violent in America. My mission as a photojournalist has always been to help people understand each other better. I couldn’t think of a place more in need of understanding.”

Since receiving her fellowship in March, she has often worked seven days a week with plenty of 12- and 14-hour days, because for her, this is the opportunity of a lifetime. “Camden is an example of our country’s urban failures, but it’s also a place where residents face incredible challenges with resilience and spirit. The most valuable thing I could do for Camden was not just to show its tragedies but to capture the dignity and joy of the people who live here. That’s at the core of my work.”

Interactive Connections
April Saul is most inspired by Tawanda Jones, founder and leader of the Camden Sophisticated Sisters drill team. Thousands of kids have participated in her program during the past 27 years. In a city where nearly half the teenagers don’t make it through high school, she demands that her members do. At one of the first practices Saul attended, a 15-year-old member became emotional when an arrest was made in her father’s murder. Soon, most of her teammates were in tears. When practice resumed, one girl explained, “We dance away the pain.”

“I went with CSS to Hollywood when they appeared on Dancing with the Stars, and to New York City for a Good Morning America appearance. They use my images for promotion and fundraising,” says Saul.

In a hospital ICU two years prior, Saul met 9-year-old Jorge Cartagena, blinded by a stray bullet on his way home to feed his parakeets. He’d been the eyes for the Puerto Rican grandmother who was raising him and who could not read or write. “After my story, photos and video about Jorge were published in the Inquirer, community leaders rallied around the boy,” she says. “The Camden police chief became a surrogate father to him, and a church charity found him a new home.”

This past spring and summer, Saul was a volunteer photography teacher at St. Anthony of Padua School in the Cramer Hill neighborhood. “We took the children to neighborhood parks to photograph,” she says, “and to a Camden Riversharks minor league baseball game, where my photographer friends and I sat with them, let them use our cameras and showed them how to tweak their images in Photoshop. We gave them prints for their end-of-the-summer show and to take home.”

As part of her fellowship, she is documenting the school year at Camden High School, where she has also started a photography club. Camden High, once Camden’s flagship, is ranked among the lowest performing in the state. “I was tired of hearing about per-pupil costs and how the kids fared on standardized tests, but rarely about how poverty impacts learning. Camden High students have precious few after-school activities. Photography seemed like a natural way for them to express themselves and depict their own community.”

Social media has played a major role in this project. Saul’s Facebook page, “Camden, NJ: A Spirit Invincible,” is a place for Camden residents to see themselves portrayed with humanity. It gets anywhere from 3,000 to 35,000 page views in a week. In recent months, she turned to Instagram as @aprilsaul.

“When I drive around and stop to take a picture, residents ask where they can see it. Instead of telling them it might appear in my newspaper, I ask them to hand me their smartphones, show them the FB page (facebook.com/aprilsaulincamden) and tell them to take a look later or next morning.”

Over the years, her stories have raised thousands of dollars for families and programs in need. For her “Kids, Guns and a Deadly Toll” project in 2006, she wrote and photographed a column for each child killed by guns in the Philadelphia area.  Each child was named, described and even mourned by a major media outlet instead of just being a statistic. A public defender used her columns to convey to his clients the impact of the lives they’d taken, and a doctor was inspired to hold a seminar on youth violence and trauma. Says Saul, “Receiving the Hero of Peace Award in Philadelphia for that work made me want to do more and probably helped lead me to Camden.”

For this project, April Saul has been using a Nikon D700 and a Nikon Df, a 17–35mm Nikkor lens on one body and a 50mm or 85mm Nikkor lens on the other, with a flash to augment existing light. She has a Nikon D7000 in her trunk for video and uses a MacBook Pro and a new iMac, which she hopes to use to “finally, hopefully, learn Final Cut Pro!”