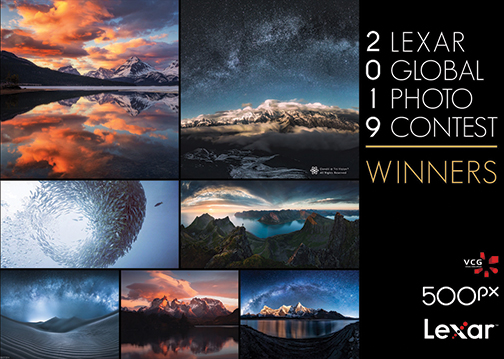 From a pool of approximately 50,000 submissions entered from all over the globe, the judges narrowed it down to two grand prize winners and five Best of Show Awards. The entries showcased Nature’s Amazing Landscapes.

This year’s competition highlighted the love of landscapes worldwide; each photographer captured images of the great outdoors. In addition, the contest winner will have their works featured at the Lexar Photography Exhibition. The exhibit is held in conjunction with the grand opening of the Memory History Museum in Zhongshan, China, on April 27, 2019. Moreover, the exhibition will remain there for one year.

Grand prize winners of the Lexar Global Photo Contest received a cash prize of $5,000 as well as a 1TB Lexar Professional memory card. Best of Show winners garnered a cash prize of $1,000 and also 512GB of Lexar Professional memory cards. In addition, all winning photographers’ works will be exhibited at the Lexar Photography Exhibition at the Memory History Museum in Zhongshan.

This year’s grand prize winners were: Annie Fu for The Splendor of Bow Lake, and Elendil for Gongga Quodis Arcana.

“We look forward to next year’s 2nd Annual Lexar Global Photography Competition. Moreover, we would like to once again congratulate our 2019 winners and best of show participants,” the company announced.