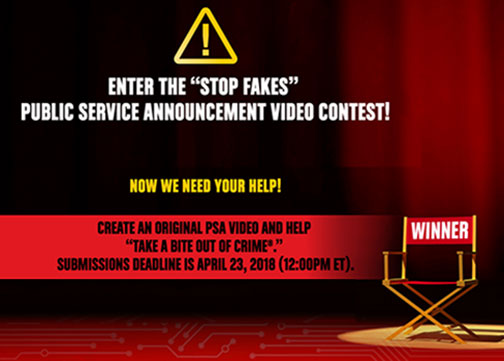 Las Vegas, NV—To promote awareness regarding the safety risks of using counterfeit accessories, such as batteries, chargers and external flashes, as well as how to avoid counterfeit products, Canon and the National Crime Prevention Council (NCPC) announced a call for submissions for the Stop Fakes video contest.

Entrants are asked to create an original video demonstrating their creative interpretation of one or more of Canon’s top 10 anti-counterfeit tips. A full list of tips can be found here: https://stopfakescontest.ncpc.org/contest-details. Entries will be judged based on creativity, originality, effectiveness and clarity of the Stop Fakes theme based on at least one of the top 10 tips to avoid counterfeits.

Moreover, the video submissions must be 27 seconds long, contain all original content and be less than 50MB. In addition, they must be in one of these file formats: MPG, MPEG, MPEG-2, MP4, WebM, MOV, FLV. Entrants can submit one new original video per day. However, all videos must be uploaded by 12:00 p.m. ET on April 23, 2018 for a chance to win.

Furthermore, entrants will have the chance to win one of three Canon prizes, including:

In addition, the grand prize winner could have their video featured as part of the nationwide anti-counterfeit consumer awareness campaign. For official rules and to enter the contest, visit https://stopfakescontest.ncpc.org/rules.