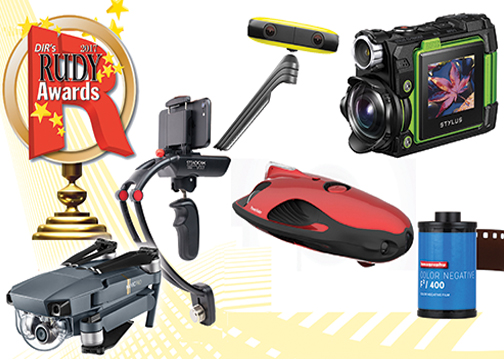 Every March, DIR asks its editors to weigh in on their selections for the Rudy Awards. The awards were named in honor of the inimitable, late Rudolf Maschke, who cofounded Photo Industry Reporter (now Digital Imaging Reporter) along with his friend and business partner, Ed Wagner.

Rudy, as friends and associates knew him, had a keen eye for industry trends and products that could expand the boundaries of imaging. It is in the spirit of our cofounder that we bestow the 11th Rudy Awards to the following innovative, forward-thinking imaging products that caught our attention.

The stealth black, foldable DJI Mavic Pro raised our interest with its ultra-cool form factor. For $999 you get that irrepressible Star Wars look plus a 4.3-mile flight range, five vision sensors and an advanced camera capable of recording 4K DCI and 4K UHD video, as well as Full HD. The video and 12MP photos are stabilized by a 3-axis mechanical gimbal at the pilot’s command with the tap of a finger. The drone also offers subject-tracking modes along with a selfie mode with gestures, and tripod plus sport modes. In addition to long-range flying, the Mavic Pro provides 27 minutes of flight time. dji.com

A minimalist approach to a 360º, VR (virtual reality) camera, the Kodak PixPro Orbit360 4K integrates two fixed-focus lenses into a futuristic-looking body. The curved lenses work in tandem to capture 360º 4K video that can be uploaded to social media via an app. Splashproof, shockproof (6.6 feet), dustproof and also freezeproof to 14ºF, it supports microSD cards up to 128GB.

The Steadicam Volt is the company’s first gimbaled image stabilization device for iPhones and the like that can be used as a standard gimbal or electronically stabilized. It’s the only product under $200 that performs at this level and can even be held upside down or at any angle up to 360º.

Because it combines an inertia-based stabilization device and an electronic gyroscope with haptic feedback, the Volt is easy to balance and provides natural camera motion similar to larger stabilizers. In addition, its arc-shaped balancing design folds for easy transport.

Rechargeable lithium-ion batteries, providing 8 hours of power, only operate the gyroscope, so a properly balanced Volt can be used manually without battery power! It ships this June. tiffen.com/steadicam

This 8-inch, dye-sublimation photo printer is marketed for both on-site and in-studio use. It provides print output from 4×8-inch photos up to 8×32-inch panoramas. The printer offers multiple print modes, including high speed and high resolution, at high or standard density. All prints are available in four improved finishes: matte, fine matte, glossy and luster.

A roll-fed design and simple dye-sub transfer help ensure the DS820A can be operated for extended periods of time. In addition, it provides capacity for large amounts of media. According to specs, the printer produces 130 8×10-inch photos and 110 8×12-inch photos before a new media roll is required. Priced at $1,300, the DS820A weighs 30 pounds and measures a portable 12.7×14.4×6.7 inches. Its compactness allows for easy transport as well as stacking for high-volume printing. dnpphoto.com

Taking its name from its unique form, the PowerRay is an underwater robot drone aimed at revolutionizing fishing. Combined with an optional PowerRay Fishfinder that leverages its sonar system, the PowerRay detects fish with precision. And it sends images of fish, underwater landscapes and temperature data to users via internal Wi-Fi over distances of 262 feet.

The PowerRay can dive as deep as 98 feet, and its sonar system detects fish 131 feet below it. The device records 4K UHD video and 1080p video in real time. It also captures 12MP photos and bursts at 5 fps. Using the PowerRay mobile app, users can view content captured by the PowerRay’s camera in real time on any iOS/Android mobile device. Pricing and availability TBA. powervision.me

As expected, the TG-Tracker offers Wi-Fi and GPS, but it also features sensors for compass direction and to log altitude, water depth and temperature, as well as an accelerometer to measure g-force and mark high-activity movements.

The camera is waterproof to 100 feet, shockproof to 7 feet, crushproof to 220 lbf., freezeproof to 14ºF and dustproof. The TG-Tracker is equipped with 5-axis electronic image stabilization, an LED headlight for a little extra illumination and a 90º tiltable, 1.5-inch LCD.

With the Olympus Image Track app, users can transfer and view videos and field data on smart devices. $350. olympusamerica.com

The hybrid, integrated system of replenishing ink was developed to be cost effective and offer a higher page yield than previous Pixmas. The black ink provides 6,000 pages per bottle and the color ink combination provides 7,000 pages. Refillable ink bottles offer 135ml for black ink and 70ml in each color bottle. G-series printers have print speeds of 8.8 images per minute in B/W and 5 ipm in color. They can produce a borderless 4×6 in 60 seconds with 4,800×1,200-dpi resolution. Prices range from $249.99 to $399.99. usa.canon.com

Humaneyes partnered with WakingApp for its ENTiTi AR/VR Creator, so that Vuze shooters have virtual and augmented reality (AR) editing capabilities. Using ENTiTi’s drag-and-drop interface, consumers can create multilayer, interactive VR content that can be integrated with their Vuz footage.

VR Studio software uses the camera’s four spatially offset microphones to provide 3D audio modeling. Consequently, it allows virtual placement of sound anywhere in 3D space to create the perception of real source direction, distance, depth and movement relative to the listener. It recreates the auditory ambiance of the environment to create an immersive audio experience.

In addition, the camera uses 3D, 360º capture technology, eight Full HD cameras and “set and shoot” operation to generate 4K-per-eye resolution in an MPEG-4 3D, 360° VR video format. The Vuze works with the supplied VR Studio’s single-click interface for near-real-time processing. The compact prosumer camera has a price tag of $799.95 and ships this month. humaneyes.com

Panasonic’s much-anticipated Lumix GH5 captures 4K 60p/50p video and 6K photos. The MFT mirrorless camera uses a new Digital Live MOS sensor and Venus engine. The sensor increases the pixel count by 25% compared to the GH4, to 20.3MP, and omits the low-pass filter. The signal readout speed was accelerated by 1.7x in the sensor, while the Venus engine processes signals at a 1.3x higher speed—all to record 4K 60p/50p ultrahigh-definition video.

With pro video features, just about every other spec was enhanced on the GH5. It achieves a 0.05-sec AF speed and 12-fps (AFS) bursts. For more precise focusing, the number of focus areas was increased from 49 to 225. Splash- and freezeproof, it also has a post-focus function; a double SD card slot compatible with UHS-II; a 3,680K-dot OLED live viewfinder; a 3.2-inch, free-angle touch screen; plus Bluetooth as well as Wi-Fi connectivity. It ships in March for $1,999.99 body only. panasonic.com

In 2010, Lomography bought the last-ever jumbo roll of original 400 ASA film from some renowned Italian filmmakers. Then, ever the ones to experiment, they left the film to age like fine wine in oak casks in the Czech Republic.

Their instincts were rewarded—seven years later they went back to discover that this fantastic film still produces refined colors with a beautifully unique tone. Furthermore, the one-of-a-kind ISO 400 color negative film has an X-Pro feel and Tungsten overtones. Currently available in limited quantities, a roll of 36 exposures sells for $5.00. lomography.com 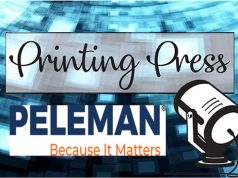