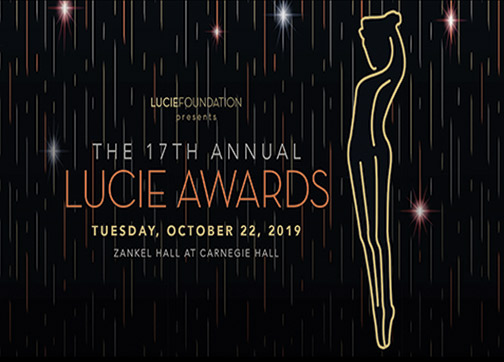 In addition, the winners will be revealed on October 22, at Zankel Hall in Carnegie Hall in New York City during the Lucie Awards gala. The nominees were selected because they were essential to the process of crafting exceptional images.

The nominees for each of the Lucie Awards Support Categories follow.

BOOK PUBLISHER OF THE YEAR
(Awarded to Publisher)

CURATOR/EXHIBITION OF THE YEAR: Sponsored by Ilford
(Awarded to Curator)

FASHION LAYOUT OF THE YEAR: Sponsored by Splashlight
(Awarded to Magazine Publications)

PHOTOGRAPHY MAGAZINE OF THE YEAR: Sponsored by Nightview Studios
(Awarded to Publisher)

PICTURE EDITOR OF THE YEAR:
(Awarded to Picture Editor)

ADVERTISING CAMPAIGN OF THE YEAR:
(Awarded to Art Director)

In addition, the Lucie Foundation will recognize this year’s honorees and winners from the 2019 International Photography Awards (IPA) juried competition; the Foundation’s sister effort. Awards presented also will include previously announced Lucie honorees, IPA prizes, Support Category Awards, and a special tribute to those in the industry who have passed on.

Tickets for the Lucie Awards are on sale at lucies.org.